History Of The Mann Center 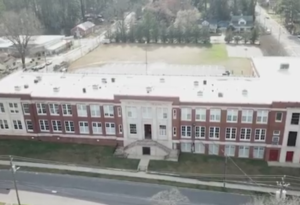 The Mann Center of North Carolina has been described for many years as The Crown Jewel of Lee County.

From it’s opening in 1925 and role as the original location of Sanford High School, to its present-day use as an event & performance venue, office space, conference room, multi-purpose room & meeting space rental facility, and home to some of the county’s noteworthy non-profit organizations and artisans, the Mann continues to serve the residents of its community.

The Mann Center building opened its doors by serving Sanford as a school with students in 11 grades. After a short while, the building became the home of Sanford High School for over 2 decades. In 1952, a new high school was constructed on Nash Street and our facility began a quarter-century of service as the location of Sanford Junior High School. With the opening of new middle schools elsewhere throughout our growing community, Lee County’s traditional middle school closed its doors, and concluded this chapter of its life at the end of the 1976-77 school year.

In 2015, by unanimous consent of the LCACC Board, the facility was renamed and dedicated as the Mann Center of North Carolina, in honor of Tommy Mann, Sr. in recognition of his many years of service and leadership to the organization.